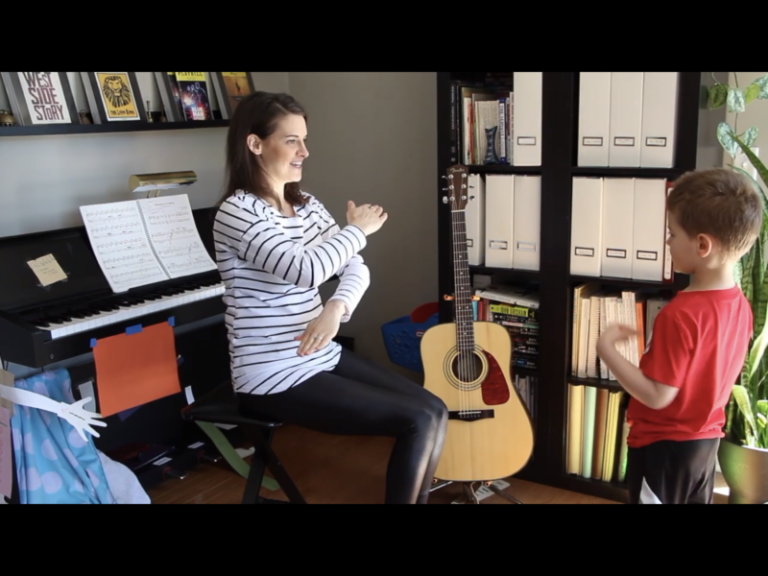 Jill Boyd with son and helper, Tommy, in their home "studio" where she conducts Music Insights classes online.

“Music gives a soul to the universe, wings to the mind, flight to the imagination, and life to everything.” – Plato

When she was a student at the University of Wisconsin, Eau Claire, Jill Boyd was focused on a music therapy major. But she wanted to accomplish more than just using music to heal.

She wanted to use music to reach people.

So she combined her interest in music and her desire to bring music to children she felt would benefit.

She added special education classes and created her own educational path before landing as a student teacher at Eden Prairie High School (EPHS) in the fall of 2006. A year later she would be hired full time.

Enter Music Insights, an EPHS class combining students with disabilities and their general education peers. That was 14 years ago. Today, it is one of the most popular music courses offered at the school.

“The genesis of Music Insights revolved around students with disabilities being able to experience music in a way that is different from typical music therapy,” Boyd said.

She knew that there was a gap in the way those students experienced music.

“As students who have varying disabilities get older,” she said, “they typically move away from our traditional music curriculum because it is so performance based. It’s just not an ideal setting for all students.”

Music Insights is a class with 24 students equally divided between those with disabilities and “mentors” who work with them. Special education paraprofessionals also provide support.

“Mentors” is a term that Boyd isn’t completely comfortable with.

“I call them mentor students,” Boyd said, “but most of the time I’m not sure who is mentoring whom. It really goes both ways.”

Senior Clara Tietz, a member of the National Honor Society who plans to major in Spanish and psychology in college, agrees with her teacher.

“It really makes my day to be with all of my friends, see their smiles,” she said. “It’s a very supportive and loving class.”

She sees her classmates facing challenges with a positive outlook.

“The thing I’ve learned most is to take each day as it comes,” Clara said.

“Originally, it didn’t occur to me that was going to be a big part of (this class), but it is,” she said.

As with every class, Music Insights has a set of target learning goals.

Targets include playing an instrument in class or singing, recognizing and performing music theory concepts, relationship building and being exposed to different music genres.

The big goal – collaborating to create a culminating performance project with the class – took the biggest hit from COVID-19 distance learning, Boyd said.

Typically, students work together to design and perform an on-stage variety show in the high school’s Performing Arts Center at the end of every semester.

COVID prevented that last spring and so far this year.

So Boyd created MiTV, a YouTube-based video presentation. The videos are a compilation of virtual performances done from students’ homes and combined into a 20- to 25-minute end product.

MiTV presentations lead off with a smiling Boyd makes her entrance in a rolling office chair – usually in her Eden Prairie dining room, explaining the upcoming show (“M stands for music, I stands for Insights and TV, well… it just stands for TV”) followed by a series of tongue-in-cheek jokes.

In the most recent holiday-themed edition, Boyd’s sons Tommy, 5, and Will, 7, made one of their occasional cameo appearances in Santa hats providing an audience for their mom’s comedy.

The bulk of the show features short musical vignettes including a variety of students and finishes with a song performed by everyone using sign language. In December it was Garth Brooks’ “The River.” See the entire video here. https://youtube.com/playlist?list=PLcqMYKB9qu2PNvQsfEk5XGxFn4PfvK7R-

While distance learning has been a challenge, the MiTV performances have been a draw.

“The first one we did was such a hit that families made it a priority to make sure that their kids were getting on our calls,” Boyd said.

“But it still is really, really, really hard,” she said. “And the lack of physical proximity, even when we’re in school, is really tough. Before, we were in a tight circle, you were right next to your buddy… and you were sharing instruments, you were holding hands, doing handshakes.”

Clara agrees that distance learning has affected the class.

“Being in person you get to do a lot more dances and interactive things that you can’t do on Zoom,” she said. “We’ve missed out on that contact part of the class.”

Even so, she said, the benefits have outweighed what is missing.

“I think the class is almost more important now during COVID than it was before,” she said. “It gives the kids the friendship aspect they might be missing. They’re always happy.”

Tietz’s classmates Maida Mohamed and Jordan Moore both agreed that the class is fun.

“I like to be with my friends and learning new music,” Jordan said via video call during a recent class.

Maida said Music Insights is her favorite class. “I learn lots of fun stuff that I haven’t done before and I get to be around friends,” said the second oldest of six siblings.

Boyd gives a lot of credit to her colleagues when she was first hired at EPHS.

“This is not the typical first job out of college,” she said. “But they realized that there was a need for more ways for students to be involved in music.”

After 14 years, there are many good memories, Boyd said.

She tells the story of a young woman with autism who took the class for several semesters.

“When she started she was non-verbal,” Boyd recalled. “Slowly, she would start to get up in front of the class and sing.”

By the time she was a senior she was able to communicate through music.

“I’ll never forget how she would sing in our shows, perfectly on pitch,” Boyd said, but never speak a word before or after the performance.

After one of her final performances, she left the stage.

“The kids who were back stage with her heard her exclaim, ‘This is the best day ever!’” Boyd said. “That was the only thing up to that time that we ever heard her speak.”

Her mom called them butterfly moments, she said.

For Boyd it was a reminder of why she envisioned the class in the first place.

“It comes back to the power of music and how our friends with and without disabilities can relate to music,” she said.

Getting back to the classroom

Boyd initially worried about how students in the Music Insights class would react to distance learning even more than the male chorus classes she teaches.

“I am pleasantly surprised with how well it’s gone,” she said. “But I really think that all has to do with the kind of students I have and the support that they are getting from their families.”

A lot of her students need one-on-one support and the families are going above and beyond so that they can be a part of the class, she said.

“The physical aspect of working with each other… without that we’re missing a piece of it,” she said. “But I think the spirit is still alive.”

She fears it may be a while before they are all able to be in classroom together. But she looks forward to the day that is possible.

“These are the kids you want to hang out with during dark times because they are hopeful and they are resilient,” Boyd said. “And for that 50 minutes…all of us in that classroom, we agree that we kind of forget about everything else that’s going on.”