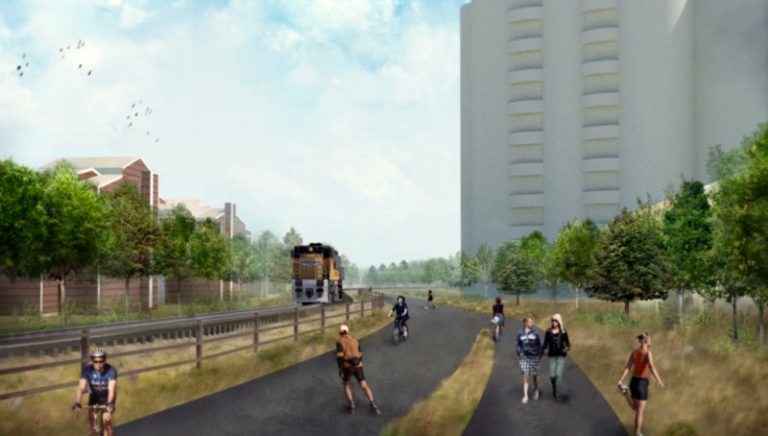 As visualized in the above rendering, the Southwest LRT will run in a tunnel northeast of West Lake Street, pass underneath Cedar Lake Parkway, and return at-grade approximately 400 ft south of the Cedar Lake Channel (Kenilworth Channel). The area of the Kenilworth tunnel will be topped by landscaping and hike and bike trails. These trails will connect to other trails including the Minnesota River Bluffs LRT Regional Trail through Eden Prairie. Image credit: SWLRT project

The Met Council has announced that two construction modifications of the Southwest Light Rail project in Minneapolis will likely delay the opening of the line. However, the modifications will not affect the SWLRT work calendar in Eden Prairie and elsewhere.

The January 14th announcement said that the cut-and-cover tunnel in the Kenilworth Corridor north of W. Lake Street and the protection wall between the light rail alignment and the Burlington Northern Sante Fe Railroad tracks to the northeast will require more building time.

Unforeseen soil conditions in the Kenilworth right-of-way have prompted the SWLRT project and general contractor Lunda-McCrossan Joint Venture to erect special retaining walls (secant walls) on the sides of the tunnel construction zone within which two parallel track tunnels will be constructed.

“We are taking this approach,” said the Met Council announcement, “out of an abundance of caution to protect the foundations of adjacent buildings.”

The freight tracks used by Twin Cities & Western Railroad trains have already been shifted to the north edge of the tunnel’s construction area.

Passenger service on what will be known as The Green Line Extension, the project says, might be pushed ahead from 2023 to 2024. Work on the SWLRT project in Eden Prairie, Minnetonka, Hopkins, St. Louis Park and elsewhere in Minneapolis, says the Met Council will continue as anticipated.

Read the full January 14, 2921 SWLRT announcement on the modifications here.