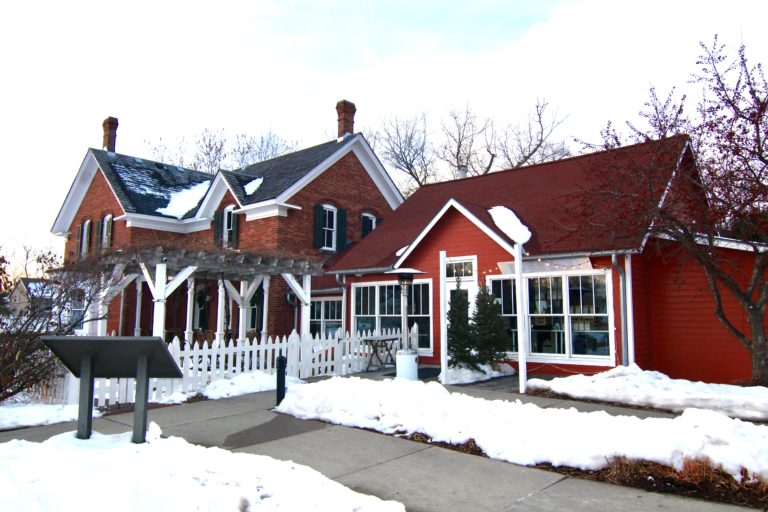 Smith Café offers scrumptious home cooked fare, an accomplished wine list, and an incredible cup of joe.  Yes, the café offers an incredible dining experience where you are you able to satisfy those hunger pangs, but it also remedies that Eden Prairie history fix you might be needing.

The home itself was built in 1877 by Sheldon Smith and his wife Mary, one of Eden Prairies founding families. It was built as their private home but had many uses.  It housed the telegraph station and was used as a boarding house for weary travelers stepping off the train from the nearby train depot.

In 1952 Earl and Helen More purchased the property and added a few modern-day “luxuries”, like electricity, indoor plumbing, and an updated kitchen. Helen More planted a legendary variety of Hosta plants that still bloom today, and the stunning six-panel stained glass window crafted by Earl hangs in the parlor.

While the Mores did make a few updates, they were still able to keep the integrity of the original home and in 1981 the Mores sold the home to the City of Eden Prairie and it was approved for adaptive reuse in 2002.

The café itself has gone through a few name changes too.  It’s been home to Dunn Brothers Coffee, Rustica and has now been renamed as The Smith Café in honor of the original builders.

As beautiful as the interior of the home is, the exterior provides a close rival with a bocce ball court, extensive Hosta garden and a magical outdoor courtyard covered with voluptuous grapevines.

This outdoor space has certainly been a plus for the café especially during the pandemic as Schuster explains, “We’ve adapted well to the new restrictions from Covid but are still feeling the effects.”

She goes on to say, “This past summer we’ve seen people using the outside space in a way that we never have before and at best were only operating at 50% capacity, but it’s not the same, we’re looking forward to the buzz we are used to seeing (when at full capacity).”

Business might be lagging in the face of the pandemic, but Schuster’s energy hasn’t slowed down. She’s focusing on the future with ideas for improvements.  An expanded kitchen is on the horizon but there are some restrictions so she must be sensitive of the integrity and footprint of the building.

In the past the cafe hosted an array of events and sales but once again Covid has slowed down the café’s social calendar.  However, one upcoming event held in February is called The Hunt for Sheldon’s Wrench. With daily clues provided by the café, residents of Eden Prairie race against other participants in an exhilarating search for Sheldon’s lost wrench.

The winner receives a $200 gift certificate for the cafe. This event couldn’t have better timing and is a wonderful way to herd the family outside. One more reason to check out this incredible find.

Smith opens its doors daily to the public as a charming café, the food is delicious, and its Eden Prairie roots run deep. It is truly one of Eden Prairie’s gems.

The café is located at 8107 Eden Prairie Road in Eden Prairie. More information about the coffee shop can be found at smith1877.com.