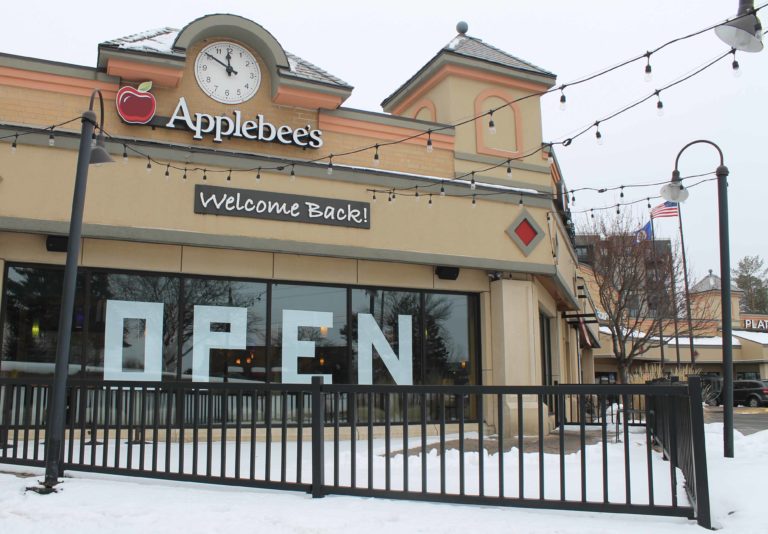 Applebee’s is among the Eden Prairie restaurants reopening for inside dining at 50 percent capacity Jan. 11. City and business officials have named Jan. 12-18 as “Support Eden Prairie Businesses Week” to encourage dining.

Eden Prairie city officials are throwing their weight behind efforts to get local retailers and especially restaurants back to normal, now that restrictions on indoor dining are loosening.

Spurred on by the Eden Prairie Chamber of Commerce, the city has proclaimed Jan. 12-18 as “Support Eden Prairie Businesses Week” as a way to encourage residents to patronize restaurants in particular. The proclamation lists more than 90 Eden Prairie bars and eating establishments, from Applebee’s to Wildfire, some of which will be reopening for indoor dining with the new guidelines in effect Jan. 11.

The loosened restrictions, announced Wednesday by Gov. Tim Walz in the wake of continued declines in COVID-19 infections and hospitalizations, allow bars and restaurants to resume indoor service at 50 percent capacity.

There is still a limit of 150 people per establishment, and parties of no more than six people must remain 6 feet apart; bar seating is open to parties of two. Reservations are required, and establishments must close their dine-in service by 10 p.m., according to the new guidelines.

Christian Del Monte, the kitchen and marketing manager of Applebee’s on Joiner Way in Eden Prairie, was overseeing takeout orders Sunday and anticipating the arrival of employees who would prep the restaurant for Monday’s reopening.

“I think people are eager to go out,” he said. “People are stressed out. They want to live life again.”

Applebee’s, he said, has followed the state’s changing COVID-19 restrictions “to a ‘T.’ We’ve done everything we can to stay afloat.”

The large restaurant chain had already been building its curbside takeout business before the pandemic. That, combined with recent growth in food-delivery service via DoorDash and other third-party vendors, has helped the business survive. So have strict sanitation and social-distancing protocols during periods when the restaurant was allowed to have inside dining.

“We had things in place when not a lot of restaurants did,” Del Monte said.

Now, restaurants like Applebee’s are hoping the public feels confident enough about the guidelines to venture back to in-person dining.

The chamber of commerce has had high school interns working on photos and stories about retailers, and the chamber will be sharing those on Facebook this week, said President Pat MulQueeny. They are asking social-media followers to chime in by posting pictures as they dine out and support the reopening.

“It was great to see the City Council do this [proclamation]and we are hoping to see the community get out and support these businesses, restaurants in particular,” he stated.

MulQueeny said there are numerous reasons to keep the restaurants and shopping mall’s food-court vendors going. Not only are they important in terms of generating jobs and taxes, he said, but they employ our youth, they help us celebrate important birthdays and anniversaries, and they serve as gathering places for friends, neighbors and others in Eden Prairie.