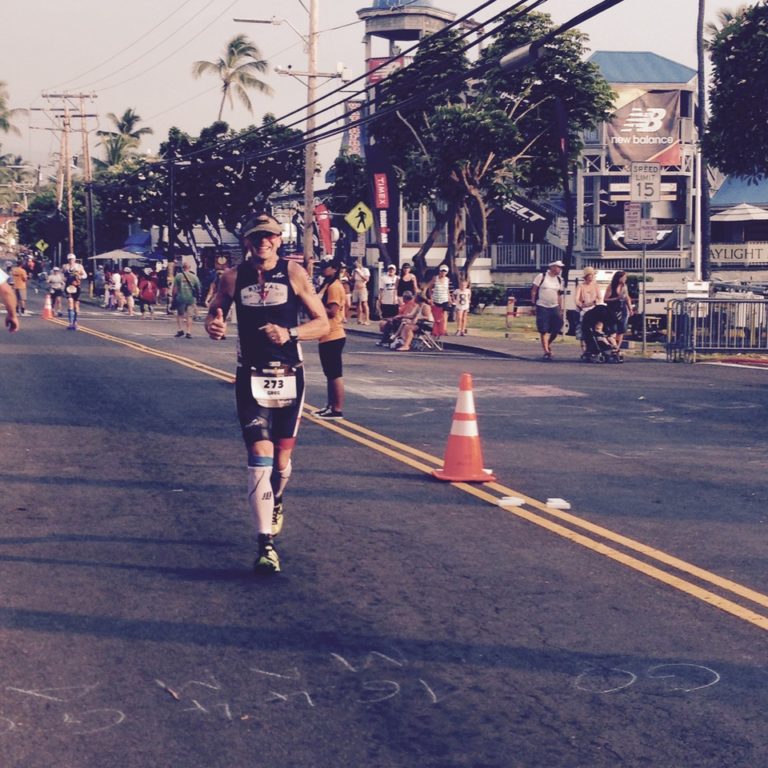 Greg Albrecht is pictured at the Ironman World Championship in Hawaii in 2015. Albrecht’s longtime goal was to participate in the event. He said it is considered one of the toughest triathlons in the world. Photo credit- Greg and Julie Albrecht

Greg Albrecht pushes the limits of his body one thoughtful step at a time.

The longtime Eden Prairie marathoner and triathlete motivates himself using positive thoughts to grind out mile after mile.

One of his favorite “mantras” repeats these words: “Stay focused, stay relaxed.”

He says this simple yet effective intonation can be used in any challenging predicament, whether running 26.2 miles or grappling with the uncertainty of the Coronavirus pandemic.

“It helps stay in the moment and focus on what your goal is right now,” he said. “It will work in the pandemic as well. See your goal, whether it’s doing a class or finishing a test, and say to yourself, ‘Stay focused, stay relaxed.’ Just keep telling yourself that, and your mind will believe what you tell it as long as you are persistent with your message and keep it positive.”

Albrecht, 66, a retired executive recruiter, has been leaning on the mantra as he recovers from a cycling accident in October 2020. He was injured when he fell off his road bike, traveling 40 mph down the picturesque and very steep Mt. Lemmon. It’s located north of Tucson, Ariz., where he and his wife Julie reside in the winter.

The most serious of his injuries were to his brain. Albrecht, hospitalized for about a month, sustained both a concussion and bleeding to the brain. He is sidelined from biking and golfing until April and running and swimming for a few more weeks.

“I’m using (the mantra) each day to concentrate on what I need to focus on at the moment on my recovery,” he said. “I’m slowly getting better. Every day’s a new adventure.”

Albrecht has spent a lifetime in motion. He’s completed more than 200 triathlons and 80 marathons in the past 25 years. “I don’t race marathons anymore,” he said. “But I would still like to do shorter triathlons.”

Running was Albrecht’s sport in high school. He’s been running ever since.

“It gives you time to be by yourself and also think out a problem,” says Albrecht, who met his wife thanks to their shared interest in running. “And it lets you find solutions to the issues you might be facing or how to handle them.”

Marathons and triathlons take much physical endurance. That’s what he stresses to the many athletes he has trained as an endurance coach. Though he’s mostly retired from coaching, he’s still on Minneapolis-based Final K Sporting Services staff.

He remembers using a mantra to keep the pain of a blister the size of an egg on his foot at bay during an Ironman event. The race qualified him to participate in the 2015 Ironman World Championship Hawaii.

“I kept telling myself, ‘It doesn’t matter. I don’t mind,’” Albrecht said. “All you got to do is keep putting one foot in front of the other, and you’re going to finish.”

Being out-of-action from his athletic endeavors isn’t easy, but it’s necessary for Albrecht. It takes about six months for this kind of traumatic brain injury to heal. Albrecht is undergoing physical therapy to help him with his speech and short-term memory.

“When you’re on a bicycle, sometimes you have to make rapid decisions on where to turn and apply the brake or swerve to miss something,” he said. “I think that my brain reaction isn’t quite back to normal, but it’s coming back.”

The accident happened soon after Albrecht, and his wife drove to Arizona from Eden Prairie. Albrecht retired in May 2019 as managing partner of M&A Executive Search. However, he still does some consulting for the Minneapolis-based firm.

Friends from Minnesota were in town and asked if he would ride with them. At an elevation of about 9,100 feet, Mt. Lemmon is a popular challenge for bikers.

“It’s slow to go up, but really fast coming down,” he said.

Albrecht sped off ahead of his friends on his brand new Specialized Tarmac SL-7, a road bike with hydraulic disc brakes. He was wearing a borrowed helmet, which cracked when it hit the pavement; his helmet was still en route from Minnesota.

“They decided to play it safe and go slow,” he said of his friends. “Since I live here every winter, I’ve gone up and down Mt. Lemmon a lot. I feel comfortable in my ability, which is part of my problem. I should have gone slow and taken it easy because there were repairs (at the bottom of the road). That was new from the last time (he rode there).”

He guesses that he applied his bike’s brakes too hard. “Hydraulic brakes will stop you right like that,” he said, noting the cycle ended up needing $1,000 in repairs. “The bike stopped, but I was moving at 40 mph. I went forward and right off the bike, even though (his shoes were clipped into the pedals).”

In addition to his head injury, Albrecht’s right ring finger was so damaged that doctors gave him the option of amputation after the initial surgery. “Being a golfer and avid golfer, I wanted a finger there, even if it were partially usable,” he said. “I opted for (another) surgery.”

While recovering, he’s walking 20 to 24 miles a week with his wife. Along the way, she tests his memory. “We do little games. The more puzzles and exercises I can do and think about while I’m physically doing something else is helping my brain recover.”

His wife reminds him that he has four months to go before getting back on a bike.

“I’ll still be able to run in a couple weeks, and as soon as my hand patch gets off, I’ll be able to swim, too,” he said.

When he’s cleared, Albrecht plans a lot more trips on the trails by her side. (He also intent on returning to Mt. Lemmon, though he intends to be more cautious going downhill.)

“I will bike with her and bike slow,” he said. “That’s my new mantra: slow and steady.”