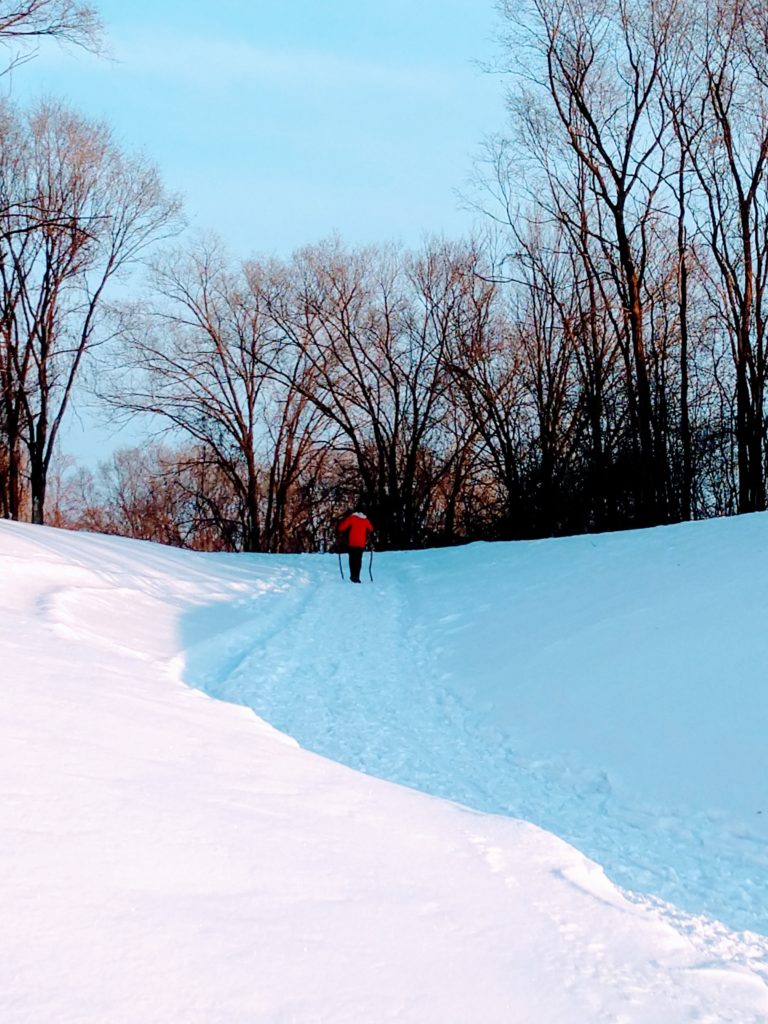 Balanced by two crooked sticks in either hand, the old-timer’s steps on the snow-packed Southwest LRT Regional Trail were short and quick.

It was January 1st, 2021 and I was sitting on the frame of a fat tire bike taking in the overlook view south to the Minnesota River. The sun skirted the tree tops of mid-afternoon like a swimmer taking a breath.

Walkers on the trail, which I frequent daily, were uncharacteristically quiet. Hungover? Looking for portents signalling clues to the coming year, or a shoe to drop?

It’s easy to get lost in thoughts on a day of quiet and contrasts; the sky high-blue and brilliant, and a short winter day’s fast approaching early evening shadows.

It’s tempting also to meander down trails of thought following a year like 2020.

The superlatives used to describe 2020 – fantastical, surreal, weird – were themselves exhausted by June, 2020. By December 31, 2020 these same superlatives were panting shells holding only a small margin of their former vigor to describe life, reality…and truth.

Against the 2020 deluge of conspiracy theories, chants, and shouts the meaning of fundamental words – like truth – retreated, or were reshaped. As such, 2020 was perhaps a counter-intuitive year to birth Eden Prairie Local News (EPLN), a media organization. And yet, it is also true that shaping, or at least holding to truths, is more important than it has ever been.

Notably, as an Eden Prairie effort, the local truth presented here in text and pictures by local journalists is uniquely touchable, seeable, and knowable.

Perhaps then 2021 is a year of embracing paradoxical truths: two or more truths in opposition which feed and inform each other, rather than the current tired game.

You may recognize the the current game. It is the one where stacking a truth over another’s truth, like an accelerating and painful of game of slap hands, devolves into the knuckle-bruising flapping of hands.

The tone of the greeting by the older man in the red coat too was recognizable. “Hey,” the informal “live and let live” greeting of casual American fellowship. Whether lovers, co-workers, or strangers “Hey” is a connecting recognition we softly toss to each other. Immersed in a fresh winter day, a soul-searching and head-clearing afternoon in a year where the superlatives have not yet been beaten down, he didn’t stop.

And he could well have ended the greeting there.

Instead, as I considered my direction while mounting my bike on that first day, he added “Pretty view huh” and trotted onward.