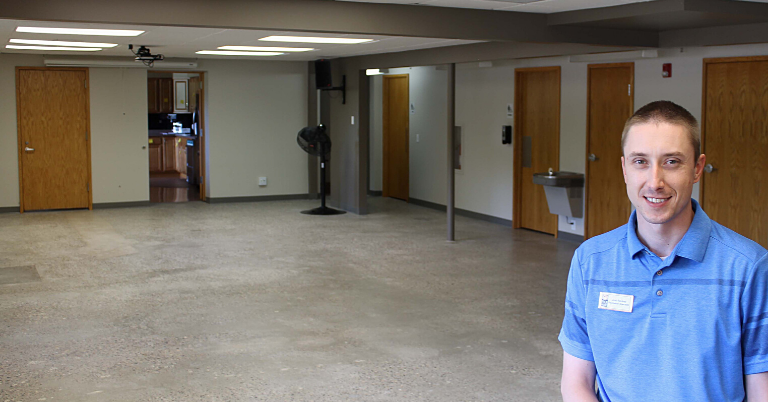 Josh Rockey and other Senior Center staff have a number of large rooms to outfit before next Monday's re-opening. (Photos by Mark Weber)

The Eden Prairie Senior Center will re-open Monday, June 7, after being closed for nearly 15 months due to COVID-19.

It’s taken a lot of time, and the lifting of COVID restrictions on gatherings, to get the city facility at 8950 Eden Prairie Road re-opened. It’s also taking a lot of communication with seniors, rescheduling of volunteers, and cleaning and disinfecting of the entire building, including cups and dishes.

“It’s getting the entire house ready for company,” Sue Bohnsack, Senior Center manager, said in describing the preparations for next Monday.

Because so many of the Senior Center’s activities are promoted for weeks before being held, programming will come in two waves: About three-fourths of the activities will resume June 7, and the rest – including large-group activities like duplicate-bridge card games – will resume on June 21, said Bohnsack.

No proof of vaccination will be needed by seniors showing up to the Senior Center, added Bohnsack.

Eden Prairie seniors have already been gathering for activities in limited number at buildings that re-opened earlier, including the Eden Prairie Community Center and Prairie Bluffs Senior Living. Also outdoors, in city parks.

But the two-story facility on Eden Prairie Road that once served as city hall is being prepped for numbers more like pre-COVID: on average, about 150 seniors per day and 32,000 patrons in an average year. The facility programs for those ages 55 and older, but doesn’t restrict activities based on age.

Bohnsack says patrons are sharing a wide range of reactions to the past-pandemic re-opening that’s happening on a grand scale.

“There are some that are going to be a little more shy and holding out – ‘cautious’ is a good word,” she said. “Overall, I think they’re relieved to get back.”