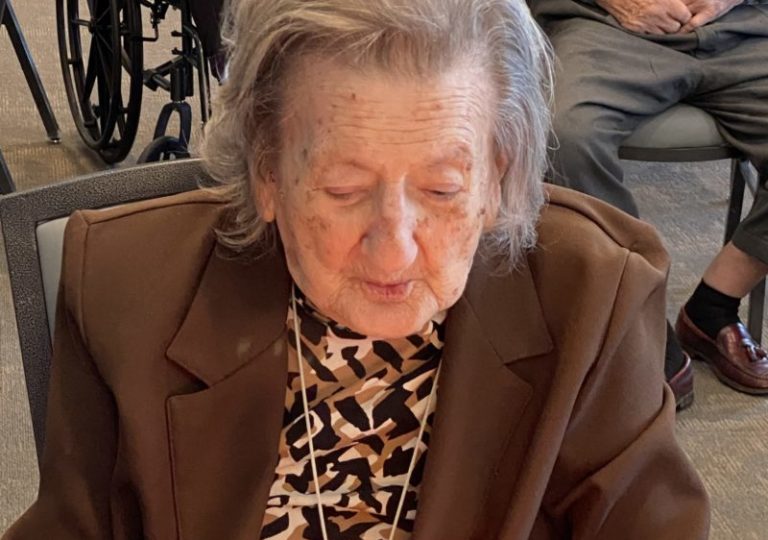 But Helen’s not Swedish.

Born in Philadelphia on April 29, 1917, Helen lived in eastern Pennsylvania for most of her life. She moved to Eden Prairie last August, according to her daughter, Stephanie Courtney. Helen’s parents were Hungarian immigrants.

“On one of these excursions, Helen met my dad Stephen.”

After they married, Helen followed Stephen to Camp Shelby in Hattiesburg, Mississippi in 1943. where the U.S. Army trained recruits before they deployed overseas.

“Helen didn’t like to sit around, so she advertised for work as a bookkeeper.  Helen used to say Hattiesburg was too warm, too damp, and had too many big cockroaches,” chuckled Stephanie.  The motel’s owner advised the young couple to shake out their shoes in the mornings.

In the early 1960s, Helen and Stephen raised chickens in their spare time and Helen trained as a Girl Scout leader.

“Helen grew flowers and vegetables until she got tired of fighting the rabbits,” said Stephanie.

“Helen loved numbers,” said Stephanie.  She managed the office at Jetzon Tire and Rubber Company north of Philadelphia, where she did accounting and bookkeeping, and she enjoyed working with the firm’s international clients.

In her retirement in nearby Chalfont, Helen got a ham radio license. Her call sign was KA3PLP.  In the days before texting, she used to chat with friends over the radio.  She loved to travel, and she made three trips to central Europe, looking for family roots in Hungary, as well as visiting Germany, Austria, and Switzerland.

The most difficult thing about her later years? “Helen has found it hard to outlive Stephen, her friends, and her neighbors,” said Stephanie.

“Like a lot of mothers and daughters, we haven’t always agreed on everything. But I love her, and I’ll always be here for her.”