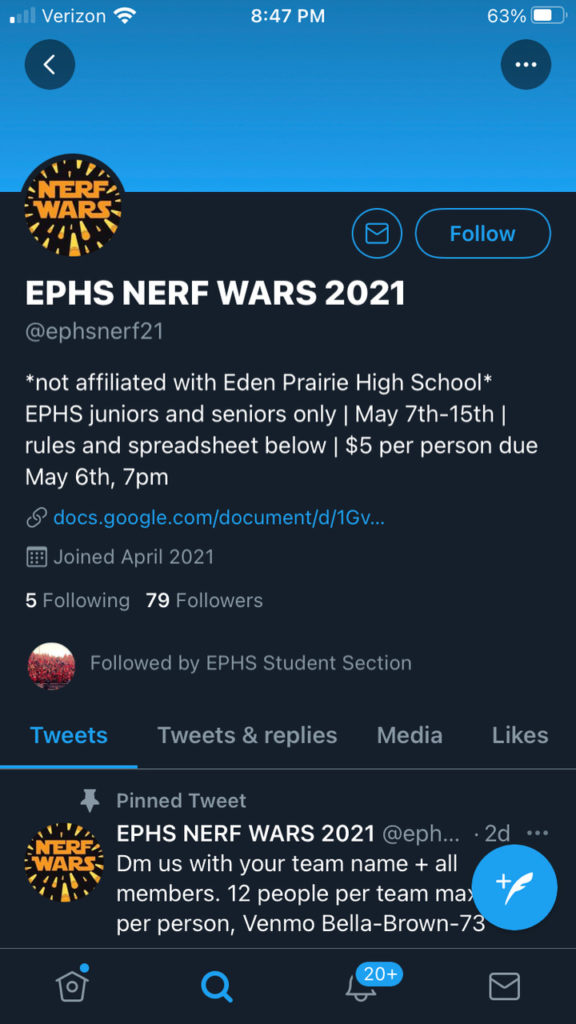 A nerf war being planned by Eden Prairie High School (EPHS) students is raising concerns among some parents and community members, as well as city and school officials despite organizers’ efforts to keep participants safe.

Nerf wars involve the use of NERF® Blasters or other foam-firing toy weapons. The EPHS version, which is not school sponsored, includes teams of up to 12 players, and has no identified boundaries in its rules posted on Twitter (@ephsnerf21), but does identify “safe zones” in which players are not allowed to shoot their opponents.

EPHS Nerf Wars 2021, which is scheduled to run from May 7 to 15, is organized by a group of six individuals who describe their group as a council. Rules are posted on Twitter, as well as specifically identified safe zones where the game cannot be played, including anywhere on high school grounds, sporting events, several specifically identified businesses and restaurants in Eden Prairie and Chanhassen, graduation parties and prom.

Participants pay $5 each to play. A Venmo account can be used to make payments. Participants are limited to upper classmen – grades 11 and 12 – only. A rule highlighted in bright yellow states: “Be smart. DO NOT put your nerf life in front of your real or anyone else’s life.”

The rules prohibit the use of cars.

“You must be outside of your car to kill someone or to be killed,” the rules state. “If you are shooting from inside your car (even if it is parked), it will result in automatic elimination.”

Participants are also warned not to have a Nerf weapon in the trunk of their car in the school parking lot. “Possible expulsion is a consequence,” the rules state.

A member of the council organizing the event declined EPLN’s request for comment.

Parents express concern online, but decline to go on the record

Posters on Eden Prairie Moms, a Facebook group page on April 27, expressed both concern for participants’ safety while others called for tolerance and trust that participants will be safe.

“It’s all in good fun and the students need this right now,” one person posted. “The rules are pretty tight…(the) majority of the kids follow the rules.”

Others offered words of caution.

“Just because there are rules doesn’t mean kids follow them,” one woman posted, along with a link to a news story about a car crash in Dec. 2015 that resulted in the death of two Lakeville High School students. The Dakota County sheriff said the crash resulted from a Nerf war game.

Several posters agreed that high school students deserved some fun after of year of COVID-19-related restrictions.

“They’ve had 2 crappy years in school due to covid,” said one poster. “I’m happy they can bond in person.”

(Editor’s Note: EPLN attempted to contact the individuals posting on social media listed above. One responded but said she was hesitant to be quoted publicly because she is an employee of Eden Prairie Schools. Another poster contacted did not respond. For more on EPLN’s policy involving public online activities and statements see the addendum to this story).

City of Eden Prairie Communications Director Joyce Lorenz referred parents of high school students to a message posted In May 2019 on the city’s website warning about the potential dangers of Nerf wars. On Thursday, April 29, 2021, the Eden Prairie Police Department (EPPD) reposted the Nerf War Safety posting on its blog.

“Participants engrossed in a game of Nerf Wars often find themselves driving recklessly, forgetting to use seat belts, driving at dangerous speeds and disregarding traffic laws,” the post said.

Another concern are the toy weapons used in the game. “Stick to using brightly colored Nerf guns that are obviously not real firearms – never use real firearms,” the post continued. “If you encounter police while in possession of a Nerf-type gun, put it down immediately and follow the officers’ instructions.”

Sgt. Rob Johnston, supervisor of school liaison officers in Eden Prairie schools, said the city has reposted the 2019 story since learning of this year’s event.

Officers have not communicated directly with the student organizers, he said. And while Johnston acknowledges that the rules set forth are a good idea, he still believes there are potential dangers.

“We don’t think it’s a good idea for safety overall,” he said. “It’s caused accidents and injuries in the past and presents something that could cause problems that we would like to avoid.”

Schools encourage parents to talk to their students

EPHS Principal Robb Virgin will be sending a message to EPHS families April 29, according to Brett Johnson, senior director of communications and community relations. “(The message will remind them) that Nerf war is not school-sponsored, that school property is off limits and to be aware of the district’s policy on look-alike weapons (in which Nerf guns are included),” Johnson said.

He noted past instances of serious injuries and property damage connected with Nerf wars. “So, we strongly encourage families to talk with their students about being safe, responsible and respectful to others,” he concluded.

(Editor’s Note: As a matter of Eden Prairie Local News (EPLN) policy, journalism standards, legal and ethical, as described by the Associated Press and Society of Professional Journalists, which presume public spaces (including public online media) are just that – public – are rigorously followed. As such, statements in online public spaces are similar to speeches on the town square.

However, EPLN recognizes online public spaces are unique and evolving and that there is a need to educate the general public regarding the nature of journalism activities relative to online spaces. Notably, the media “record” and public online statements are not the same. Individuals who make public online statements while declining to go “on the record” with media organizations, such as EPLN, are making a choice. By describing an individual’s choice to go “on the record” or not, EPLN enables its readers to decide what an individual’s choice means, such as the value of the statements, their truthfulness, and the commitment an individual has to those comments.