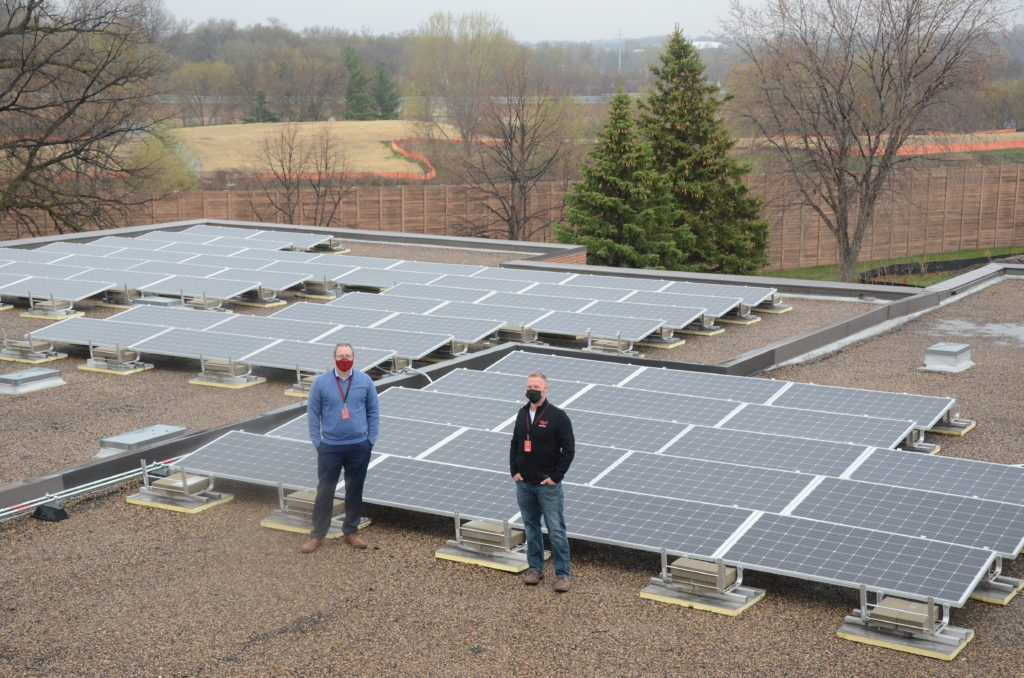 Just to the left of Cooper’s cubby in a preschool classroom on Eden Prairie’s Lower Campus is a game closet. Behind a locked door in the closet is a nearly vertical set of steps leading to the building’s roof.

What Cooper may not know is that at the top of those steps is a miniature power plant consisting of 125 solar panels stretching across the roof above he and his classmates.

The array is one of 20 on eight Eden Prairie School district buildings that generate just over two megawatts of electricity annually – enough to power 258 homes for a year, according to Jason Mutzenberger, the district’s executive director of business services.

Eden Prairie Schools has been in the solar power business since 2015 when it made the decision to invest in two community solar gardens in Wright and Dakota counties. Shortly after that, Mutzenberger nudged the district toward the rooftop arrays based on his experience at another school district.

Mutzenberger, who joined Eden Prairie Schools in 2014, initially saw the financial benefits. “Since then, it has become as much about the environmental impact of sustainable energy,” he said.

The solar panel arrays installed on the roofs of Eden Prairie school buildings has the same impact on carbon dioxide (CO2) emissions as planting 15,000 trees and removing 330 cars from the roads, Mutzenberger said.

More importantly, the district’s investment in rooftop solar and solar gardens produce the equivalent of 80% of the district’s annual electricity usage, Mutzenberger said. The district expects to save $4.3 million in energy costs over 25 years from the rooftop arrays and another $4 million from the solar gardens.

Utilities are the third largest budget item the school faces, behind salaries and benefits, Mutzenberger said.

The first panels were installed at Cedar Ridge Elementary, Oak Point/Eagle Heights and Prairie View Elementary in 2017. Now there are two arrays on each district building, except the transportation building. Four more are being installed in 2021 – another at Cedar Ridge and Oak Point that will be completed by June, and others at Central Middle School (CMS) and Eden Prairie High School (EPHS) to be completed by the end of the year.

The district is able to take advantage of state and federal subsidies to avoid paying upfront costs for rooftop solar panels, Mutzenberger said. Annual energy production pays for installation and maintenance over the course of contracts that run from 13 to 20 years.

iDeal Energies of Minneapolis installs and maintains the rooftop solar arrays on school buildings. The panels are warranted for 25 years and are expected to last 40 years, Mutzenberger said.

Will the district run out of roofs?

Fisher said that the number of arrays that can be added to district buildings depends on the condition of roofs and where they are in their life spans. “We need to think critically about where we are placing our solar arrays,” he said. Adding arrays in conjunction with roof replacements and other major maintenance projects reduces the disruption to existing power generation, he added.

When roofs do run out, additional options for solar arrays include parking lot canopies and ground installations, similar to the one the City of Eden Prairie has installed at its water plant at Highway 5 and Mitchell Road.

Electricity generated on school roofs doesn’t power the plugs in each building. Instead, it goes back to the vast power grid and is credited to the utility bill at each site, which are metered separately.

By law, the district is limited to generating up to 120% of its electrical needs using solar power. The district’s goal is to produce 100%, Mutzenberger said.

“Can we get there?” he asked. “I’m not sure. We haven’t run the calculations to see if we have enough rooftop available to get to the 100%.”

That’s why saving energy will play an important part in achieving that 100% goal, Fisher said. To that end, the district is working on several fronts.

The cost of solar panels has dropped 65% over the last decade and schools avoid upfront investment and ongoing maintenance through third-party ownership, he said.

Eden Prairie Schools also partners with the City of Eden Prairie, Hennepin County, and Xcel Energy as Partners in Energy. They meet periodically to discuss ways the entities can work together on a number of sustainability issues, including utilities, waste reduction, food composting and others, Fisher said.

“We would like to be part of building a more comprehensive plan to achieve sustainability,” Mutzenberger said.