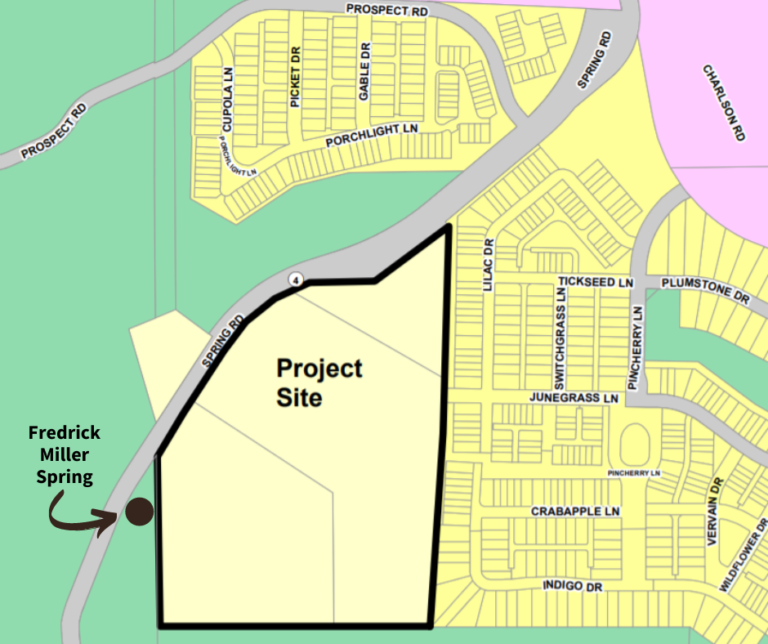 The Noble Hill development is proposed for 28 acres near Fredrick-Miller Spring in Eden Prairie.

Neighbors opposed to a plan to build homes near Fredrick-Miller Spring in southwestern Eden Prairie have raised $3,200 to hire an environmental lawyer to help them fight the project.

The GoFundMe effort called the Fredrick-Miller Spring Friends Lawyer Fund was started last week by Justin DeAngelo of Chaska, who said he’s an “environmentalist at heart” and adds that the 50-house plan by Pulte Homes will impact wildlife and plants, and not just the quality of water produced by the popular spring.

He and Sue Bennett, a 35-year Eden Prairie resident, say they hope the effort prompts the Eden Prairie City Council to delay or deny the rezoning needed to develop the 28 acres east of Spring Road. They are pushing for additional environmental study of the area, beyond what has been required of the developer by the city: a spring assessment that would determine if the site has protected species on it, including the endangered rusty patched bumble bee.

Bennett said a delay would also allow opponents more time to consider whether outright purchase of the site for open-space preservation is possible. “Yes, we’re looking for a pause,” said another leader of the group, Rebecca Prochaska.

The city council is scheduled to review the project, called Noble Hill, for the first time May 4.

Bennett said a petition opposing the project has more than 2,700 signers.

Noble Hill was endorsed 5-3 by the Eden Prairie Planning Commission on March 22, based in part on an environmental study in 2007 that identified the spring’s water source as west of Spring Road and not on the Pulte Homes project site and therefore not a threat to the spring.

Public testimony at the March 22 meeting focused mostly on development’s possible impact to the popular and historic freshwater spring, which is on city-owned land adjacent to the sited proposed for development. The next day, the City of Eden Prairie issued a public statement emphasizing that the project would not harm the spring.

But opponents – including residents of the nearby Hennepin Village neighborhood – say the undeveloped site should be protected for additional reasons, including its biodiversity, proximity to Riley Creek and the nearby Minnesota River area, bird habitat, trees that would be lost to development, and steep slopes that invite erosion.

The developer has maintained that, by using retaining walls and storm-water management, and by keeping parts of the site undeveloped – including eight acres near Riley Creek and the freshwater spring – it can avoid harm.

(Mark Weber is executive director of the Eden Prairie Community Foundation. Two of the Foundation’s board members are on the city council.)