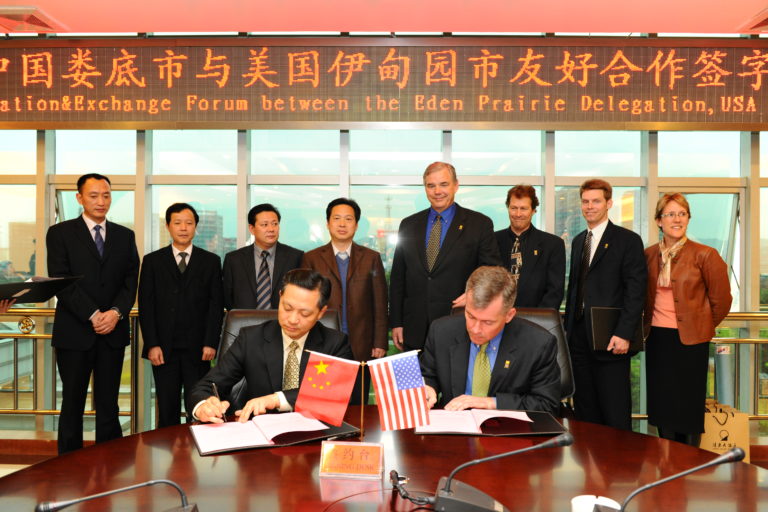 The 2009 signing of the Memorandum of Understanding by Eden Prairie Mayor Phil Young and Loudi Mayor Zhang Shuofu.

The story begins in 2006, during a plane flight to the other side of the world.

At that time, Eden Prairie’s Habitat for Global Learning had financed an opportunity for Eden Prairie schools Superintendent Melissa Krull to join a State of Minnesota Trade Commission trip to China, according to Dave Lindahl, Eden Prairie’s Economic Development Manager.

Midair, Krull met Richard He. He was a Chinese-American drumming up international business for Chinese cities, including Hunan Province’s Loudi (pronounced “LOH-dee”).

Contrary to the recollections of some, there was never any intent to have a “sister city” relationship with Loudi.  Eden Prairie Chamber of Commerce President Pat MulQueeny notes that Loudi already had Ramsey, Minnesota as its sister city.

Former Mayor Nancy Tyra Lukens says that Loudi was mainly interested in having US businesses set up production in Loudi. Not, for example, importing from Eden Prairie.  Lindahl said Eden Prairie thinking at the time was to have a “strategic relationship” with a Chinese city. What ensued were exchange agreements and a “memoranda of intent” which resulted in the cultural exchange of students.

MulQueeny acknowledges that the Eden Prairie school district did make some good connections with the Loudi schools.  Coincidentally, this was around the time that Eden Prairie schools started teaching the Mandarin Chinese language.

Lukens, MulQueeny, and Lindahl said the Loudi/Eden Prairie student exchanges were a success.

Lindahl says that Loudi received him and other delegates with lavish hospitality.  He was very impressed by a tour of a Loudi steel plant.

Lindahl said that Loudi officials became visibly upset at one point. He had observed that since Loudi has no major airport, business visitors would have to drive two and one-half hours from the closest Chinese airport.  MulQueeny also observed inland Loudi does not have access to a river permitting transit of shipping container loads of finished goods to the major ocean ports on China’s east coast.

Through 2011 there was robust activity by all involved to make something of the strategic relationship.  Now, however, every Eden Prairie official interviewed agrees the relationship has “faded”.

Lukens feels that anything like a sister city relationship does not make sense for a suburb like Eden Prairie and is very expensive.

Currently, Mulqueeny notes, not only is there pressure on US businesses to “buy American” but even to “buy local”.  Having said that, he noted that some Chamber corporate members already have production facilities in foreign cities, and generally speaking Chamber members think globally.  He feels that these days there would have to be “a more identified need” than was present in the exploration of Loudi.

Lindahl said currently he is not hearing from Eden Prairie companies looking for additional international ties.

In essence, the Loudi experiment evolved into a needs-based approach. MulQueeny noted, identifying the exact needs and capabilities are key to sourcing efforts.  Moreover, Lindahl’s emphasis on “strategic” sourcing by Eden Prairie’s 2,800 businesses is also suggested by this view.

International business relationships for Eden Prairie, said Mayor Ron Case can only be a positive thing. At the same time, Case said he would welcome guidance from the Eden Prairie business community.

As for other aspects of the Loudi experiment, Loudi’s entrepreneurial rush to develop business ties was set in motion by Deng Xiaoping (“dung sh-ow ping”), the Chinese leader who, from 1978 to 1989, pursued creating the “blended economy” of modern China—part communism and part red-hot capitalism.  This action revived the centuries-old tradition of the Chinese being merchants to the world.

In turn, the opening up of China generated the excitement of American officials and businesses causing a surge of US interest in sister city and other business and cultural relationships between the US and China.

The world continues to turn, and change, as does the relationship between the United State and China to this day.

Sixteen years ago, due to a chance meeting on a plane flight to the other side of the world, Loudi and Eden Prairie informed each other’s past. Although never quite “sisters”, perspectives were shaped which continue to evolve, to inform the present, and perhaps, the future..