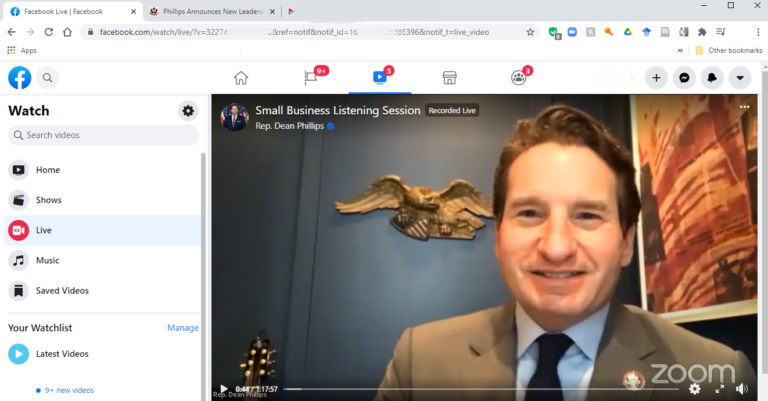 Just the day before, on January 28, 2021, Rep. Phillips announced he was named to the U.S. House Committee on Small Business where he is also chairing the Investigation, Oversight, and Regulations Subcommittee.

Pat Mulqueeny, President of the Eden Prairie Chamber questioned the current rules which tax Paycheck Protection Program (PPE) loans at both the state and federal level. Rep. Phillips responded that he prefers “consistency” between federal and state government taxes on the issue and noted “It defeats the purpose of the program when we’re taxing an emergency benefit.”

Mulqueeny asked about the likelihood of a COVID-related  federal shutdown impacting businesses. Rep. Phillips noted he hoped there was no need to have a federally mandated.

“I don’t expect any federal shutdown mandates, even if things somehow got bad again” said Rep. Phillips, noting he didn’t think a shutdown was the strategy being pursued by the Biden Administration.

The Biden Administration’s strategy, said Rep. Phillips, is to get people vaccinated “fast” in order to avoid economic impacts. To that end, the single-dose vaccine today announced by Johnson and Johnson “is huge, huge for all of us in business and otherwise” said Rep. Phillips.

Ann Schuster, owner of  Smith Coffee and Café in Eden Prairie advocated the need to further prioritize vaccination of restaurant, retail, and grocery workers. Schuster noted these workers are exposed to the general public and experience increased infection risks as well as economic stress due to reduced working hours. Restaurants have been restricted to 50% or less capacity since March 17, 2020, said Schuster.

In response, Phillips said he was  “dismayed with slow rollouts, pitfalls, and communication problems” inherited from the former Trump administration. At the core of the problem is a “lack of access to the vaccinations themselves,” said Rep. Phillips.

“I don’t want to relitigate the past” but what the Biden Administration inherited was an “unmitigated disaster,” according to Rep. Phillips, “but it is being corrected.”

As a co-founder of the Penny’s Coffee shops located in Wayzata and Minneapolis, Phillips said he had  brought the issue of “ramping up” vaccinations of more people to Minnesota Governor Walz’s staff and others. Phillips also noted that there are different rationales for prioritizing  vaccinations, but that healthcare workers, teachers, older folks who are more susceptible “have got to be first in line.”

“I think vaccinations are going to be ramping up considerably,” said Rep. Phillips “so every Minnesotan who wants one will be able to receive them.”

Phillips stated that supporting small business was an issue in which there was “ bipartisan agreement between Republicans and Democrats.” According to the Small Business Administration Minnesota’s Third Congressional District has more small businesses – generating payroll in excess of $11.2billion annually – than any other District in the state.

A recording of the full video call discussion is available here.