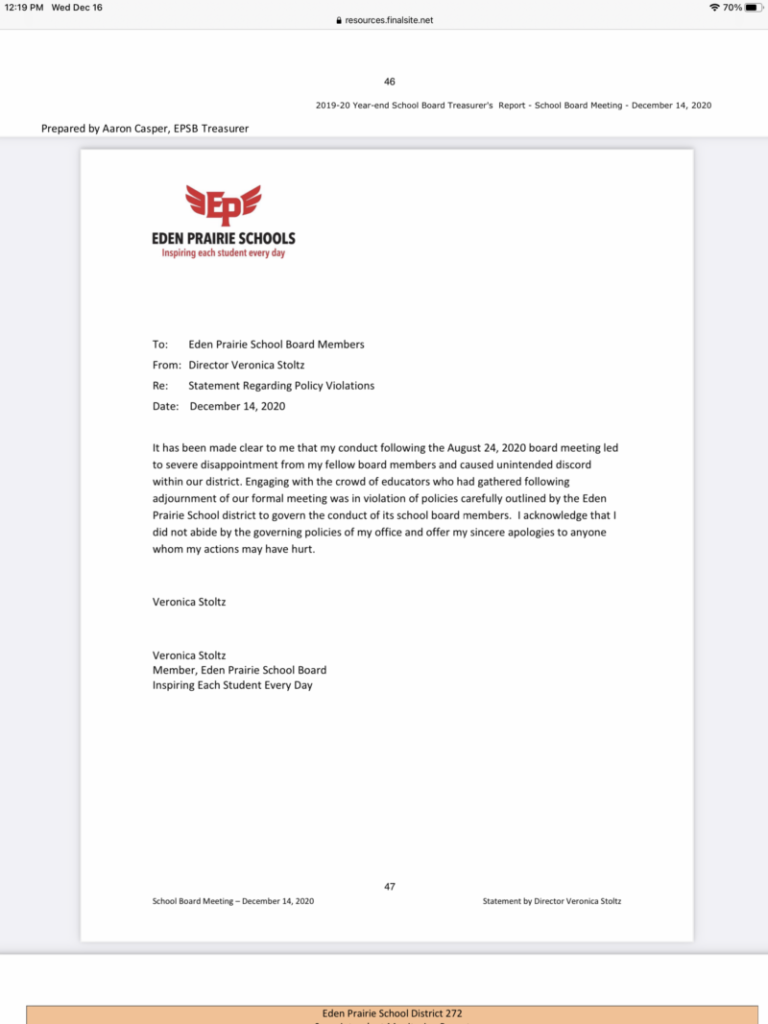 Starting in late November, posts on social media have expressed confusion about what led the school board to take actions on Stoltz’s Aug. 24 conduct, as noted in a previous EPLN article.

Discussion prior to Dec. 14 apology statement

Before reading her statement at the board’s Dec. 14 meeting, Stoltz asked the board for clarification as to her ability to speak publicly about the incident.

“I feel that this (Aug. 24) incident needs context,” she said. “I feel like there’s been very direct disciplinary action (that) our trusting public does not have the ability to look into themselves because there is no transcript of the nearly 30 minutes that transpired where we all received information as a board following the Aug. 24 meeting.”

“You are requiring a public apology from me for which our public should have transparency as to why,” she added.

Other members agreed that Stoltz has the right to speak publicly to explain her actions. “Board members are allowed to speak to the press,” Board Chair Elaine Larabee said. “They are not allowed to speak for the board. You can speak for yourself as an individual.”

Board member Terri Swartout told Stoltz that what happened after the Aug. 24 meeting was difficult for her. She said it was essentially an open meeting about which the public hadn’t been notified.

“The meeting had adjourned, but because we were all there, one board member speaking when the entire board is there…it looks like you’re speaking on behalf of the board,” Swartout said.

At the Nov. 9 workshop meeting Stoltz was found in significant violation of five policies under the School Board Members’ Code of Conduct. One policy requires members to “demonstrate loyalty to the owners, not conflicted by loyalties to staff, other organizations, or any personal interests as consumers.”

At the Nov. 9 workshop meeting Stoltz was also determined to have violated the conflict of interest section of the code, as well as a section prohibiting the exercise of “individual authority over the school district or attempt to cause division between School Board members or the School Board and members of the district.”

The board discussed the Aug. 24 incident at a Nov. 9 workshop meeting. It was at that meeting that they formally identified violations and determined the actions required of Stoltz. The Nov. 9 meeting was broadcast live via webinar. However,  no recording of the Nov. 9 meeting nor minutes are posted on the district’s website.

On Dec. 16, Stoltz replied via email to a request for further comment following the Dec. 14 school board meeting. Stoltz said that at the beginning of the Aug. 24 meeting she made two attempts to modify the agenda to allow for discussion of the safety and security of students and staff due to the COVID-19 pandemic.

Both motions failed due to a lack of a second without discussion.

Stoltz said that the board received about 140 emails leading up to the Aug. 24 meeting. Many of the emails expressed concerns about inadequate preparations to begin the school year, which was scheduled to begin on Aug. 30.

In her response on Dec. 16, Stoltz also noted, one teacher at the Aug. 24 meeting indicated that she knew the board had received emails and decided to go to the meeting after watching the first portion of the live stream of the meeting and realizing that those emails weren’t going to be discussed.

Stoltz explained further in the Dec. 16 email what happened after the Aug. 24 meeting adjourned:

“School board members were essentially taking an expected break… This break coincided with the moment audience members rose to their feet and held up posters for the board to read,” she wrote.

A workshop meeting was scheduled to follow the regular Aug. 24 school board meeting, which is common, Stoltz said.

“Rather than leaving the PAC (the Eden Prairie High School Performing Arts Center, where the meeting was held), I chose to walk among the socially-distanced audience members in order to read their signs. Eventually, I returned to the stage, but had not taken my seat.”

On Aug. 24, most board members had not returned from a scheduled break between the school board meeting and a workshop meeting. It was during the break that audience members began speaking , she said.

“Since (audience members) began this process quite out of the blue, I never took my seat. I remained standing and used my phone to video…

“At the time (Aug. 24) using my phone was also NOT in violation of school board policy,” she said. “However, following my action the board added a restriction on the use of personal devices at the board table…”

Policy 4.5.6.1 now restricts the use of electronic devices at board meetings and workshops to district issued technology. The policy was adopted unanimously at the Oct. 26 regular board meeting, according to published meeting minutes.

While Stoltz acknowledges that the policy is meant to address other issues as well, “This new policy is, in part, a reaction to my choice to record the events of Aug. 24,” she said via the Dec. 16 email.

“From the perspective of my colleagues and according to the policy, the preferred behavior would have been for me to quietly listen to audience input without engaging with them in any way…” she noted.

“Had I sat silently at the board table and only listened to the teachers’ comments, this would be a non-issue,” she concluded.

After some discussion at the Dec. 14 meeting, Stoltz read her statement for the record and the board voted unanimously to accept it. Stoltz has signed up for training sessions required as part of the board action, Larabee reported. Stoltz was also removed from a board committee assignment.