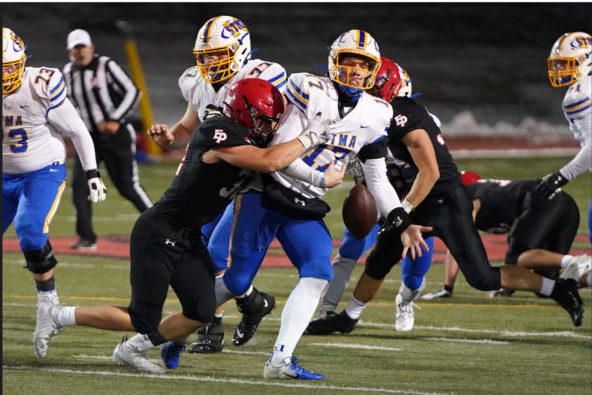 “We have a bye due to Covid,” said Eden Prairie coach Mike Grant. “Three teams dropped out.”

In a healthy world, Eden Prairie would be playing on Tuesday, the start of the tournament.

“It’s a game we’d like to be playing,” said Grant. “We’d be expected to win and would probably only play our starters for a quarter or so, but other kids would get an opportunity to play in a varsity game.”

Had this been a state championship year, Grant may have welcomed the bye.

“We’re at the end of playing six physical games,” he said. “We have some nagging injuries, sore ankles and sore elbows.”

Eden Prairie plays the winner of Prior Lake vs. Roseville on Saturday, November 21.

Question: Is Eden Prairie disappointed that it won’t be challenging for a state championship?

“There are probably four or five teams that really wish they had a chance at a state championship,” said Grant. “Almost everyone else got their seasons and now has the potential to play a couple more games.

When talk turned to his own team, Grant said his players are well aware of the environment they’re playing in.

“They’re fully aware of what’s going on with Covid,” said the coach. “We talk about every day.”

At the end of September, Minnesota was reporting 1,000 new cases per day.

On Saturday, the state counted a record 8,703 new cases.

For the record, the Eden Prairie coach had preferred a spring season.

“The guys have a chance to finish strong and go 8-0,” said Grant. “Not only are they a special group, but they’ve been so thankful that they’ve had a chance to play.”

On Tuesday, they’ll watch Prior Lake vs. Roseville.

On Saturday, they’ll host the winner.

If Eden Prairie wins on Saturday, it will most likely face the winner of No. 2 seeded Farmington vs. No. 3 seeded Totino-Grace in its season finale. A date and time has yet to be determined.